Welcome to the Tutorial/TRF Support Center...

What are AVID Tutorials? 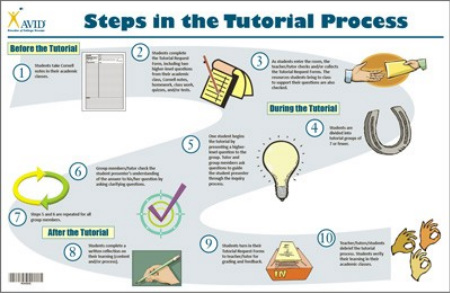 Tutorials take place twice a week, either on Mondays & Wednesdays, or Tuesdays & Thursdays.   The AVID tutorial process is divided into three parts---before the tutorial, during the tutorial, and after the tutorial. These three parts provide a framework for the 10 steps that need to take place to create effective and collaborative tutorials.

Tutorial Process
*When assigned by a teacher, or the night before tutorials, each student will develop at least one question they have in a class they may be struggling in.
*Students will be divided into groups upon entry into the classroom.
*Students lead one another with collaborative group discussions and questioning to determine the answers to the presenter's question.  Tutors and the AVID teacher are merely guides in this student-centered activity.
*NOTE:  Collaborative discussions and the inquiry process are the keys to tutorials, not necessarily coming up with the exact answers.  There will be times students might leave tutorials with their questions unanswered and this is okay.   If a student comes to the conclusion that they cannot answer their question, it leads them to realize they must seek further help from their teachers, parents, etc. 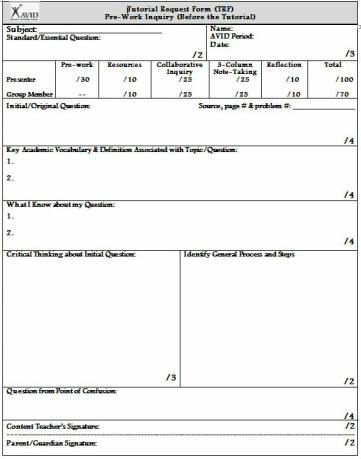 1.  Heading
Complete the Name, Period, Date in the upper right-hand corner.
2.  Subject & Essential Question
Complete the Subject Area and Essential Question in the upper left-hand corner.
3.  Initial/Original Question & Source
This may come from a homework question, c-note from class, a movie clip in class, lecture,
notes in your notebook, etc.   Be sure to write down what your source is, and bring that source
to class with you.
4.  Key Academic Vocabulary & Definition
Write down two vocabulary words related to your initial question.   Then write down the
academic definition from a dictionary, your notes, or a textbook, it may be re-phrased in your
own words, but it should not be a definition that you make up on your own.
5.  What You Know About Your Question
This can come from your notes, it can be your analysis of a character, or explanation of a step
by step process, further explanation of the definitions in your own words, etc.  This is anything
that you DO know about your question for sure.  It may be a good idea to pull on prior
knowledge when filling out this box and try to connect your initial question with a past
experience.
6.  Critical Thinking about Initial Question
You should be showing your work and ideas for what you have tried so far.   This is the area
where you may show a venn diagram, t-chart, step-by-step process.  This is not a list of what
steps you will follow during tutorials.   In this box you actually TRY to solve your question and
show your work and ideas here!
7.  Identify General Process and Steps
In this section you explain what steps you followed so far to try to solve your question.  Your steps should be general enough to use again on a similar problem or
scenario.   If you did NOT solve your initial/original question, then your final step should be to discuss with tutorial group.
8.  Question from Point of Confusion
- If you DID solve your initial/original question after thinking critically, then your question from point of confusion should be a level 3 question that extends the same
concept.
- If you DID NOT solve your question after thinking critically, then your question from point of confusion should be focused on exactly what part you got stuck on.9.  Signatures
Do you have a science, math, language arts or social studies question... go get your science, math, language arts or social studies teacher to sign off and approve
your question.   Then get your parent to sign your TRF to show that they reviewed it with you. 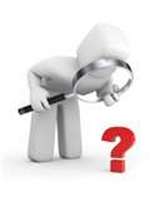 Use the example question starters below to help you formulate a question of your own.  If you do not understand what a word means or what a question is asking, then choose a different one.

Watch the video below for step by step instructions and an example of how to complete each part of the Tutorial Request Form (TRF).